In Fall Creek, WI, an old barn was experiencing several issues that needed to be addressed. The owner reached out to DBS about the concerns. As it turned out, the barn had structural damage caused by a bowing wall. When a block wall ages, it can begin to crack or cave in, and the degree of severity can vary. However, it is important that all cases of bowing walls are dealt with in order to prevent further damages. Aside from that, the barn owner was also worried about possible high radon levels in the area. This can be very alarming, as radon is an odorless, colorless, and deadly gas. Many properties have radon that comes from the ground up, without even knowing it. Fortunately, DBS had a Design Specialist visit and provide a free, no-obligation estimate for the services. It was decided that the barn wall would need to have a combination of GeoLock® anchors installed, as well as several PowerBrace™ units. As for the radon, the levels were tested, and it was determined that a mitigation system must be installed.

It is not uncommon for several different projects to be carried out at a site, one coming after the other. As stated, in order to successfully stabilize the block wall, the crew would have to install GeoLock® and PowerBrace™. The GeoLock® Wall Anchor System is composed of galvanized steel anchors, which are embedded below undisturbed soil outside of the wall, then attached to the inner portion of the wall. This creates a pulling force exerted on the wall which will stabilize it, and can even help move it back to the original position. The PowerBrace™ units are placed in front of the bowing wall to help brace it from any further movements. As for the radon portion of the job, the levels of radon tested higher than what is considered a reasonably safe amount. This meant that a mitigation system would need to be installed. Not only does this help extract the harmful gas, but it allows for the owner to monitor their levels at any time with a level test kit. Overall, the project turned out to be a success, and the barn owner can now be more comfortable with a safer environment. A photo of the completed wall support project can be viewed here. 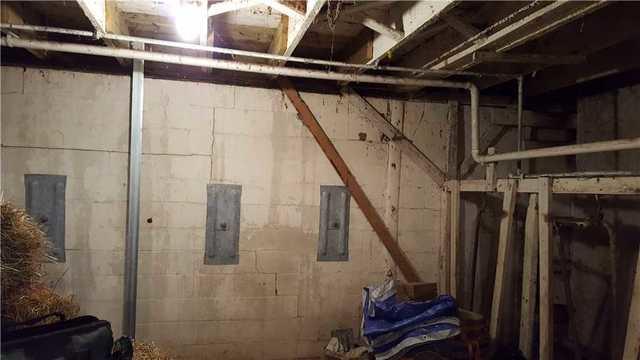 Photo showing the inner portion of the GeoLock® anchors and PowerBrace™ in front of the wall.